EXCLUSIVE: Interview With Angela White, Producer Of ‘A Question Of Faith’ 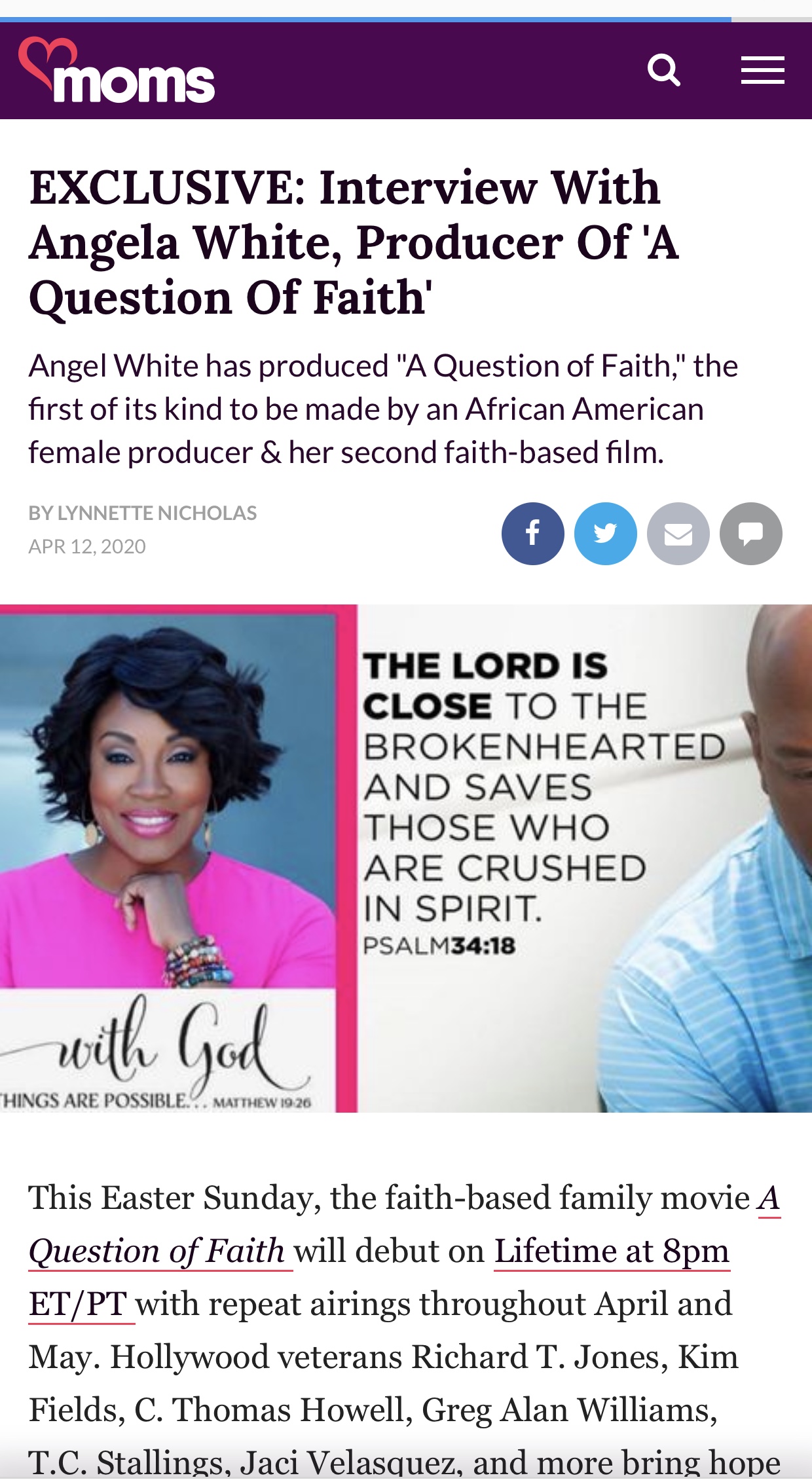 Angela White has produced “A Question of Faith,” the first of its kind to be made by an African American female producer & her second faith-based film.

When a teenage girl hits a twelve-year-old boy with her car due to texting while driving, the tragedy binds three families together, and their destiny sets them on a challenging path that leads them to discover God’s love, grace, and mercy. Kim Fields, Richard T. Jones and C. Thomas Howell star in the film written by Ty Manns and directed by Kevan Otto. The movie is the first of its kind in the space to have been produced by an African American female producer—and the second faith-based feature for veteran producer Angela White. Of the entertainment industry, White states, “A lot of us don’t realize that the real power is behind who’s controlling the content. I think we need more people looking at creating more, instead of just being in front of the camera.”

Moms.com recently had the opportunity to speak with White, founder of Silver Lining Entertainment . Check out the interview below to see what White has to say about faith, the importance of controlling the narratives within the Arts & Entertainment industries as well as the business of acting.

Many sophisticated intellectuals feel the need to keep their faith private for the sake of professionalism. How important is it for you, an accomplished leader in arts and entertainment industry to use your platform to create faith-based content or would you speak to this?

Yes, it’s important. It takes a while to feel comfortable Lynnette, because a lot of people try to put you in a box. You will lose some fans, and some colleagues will not want to be associated with filmmakers who do faith-based content for various reasons. When it comes to two topics specifically –politics and religion– we’re breaking the rules, because once you start talking about religion, you’ll get into people’s morality. Once you start getting into people’s morality, that’s when we start seeing separation between ideology. Once you start having that, that’s where people become afraid and feel like, “Oh, I can’t be friends with you anymore, because you believe this or you believe that.” So, when you start engaging in faith-based content, you have to be prepared for people to question your own morality. Be prepared for people to start trying to put you in boxes, because they will say, “Hmm, are you that type? Are you a Bible believer, or whatever the stereotype is.”

While ‘A Question Of Faith’ Is A Faith-Based, Family Film, What Types Of Productions Do You Generally Work On?

Then you have other producers like myself, who work in both secular and faith-based spaces. We want to reach everybody. So, we’re on both sides of the fence. We will do secular content, and we’ll do non-secular content. For me, I just love telling stories. I had to evolve to get to this place. Also, career-wise, I’m more established. When you first break into the industry, you’re just doing whatever to get the job, right? Then, after a while you start saying, “Hey, I want to do my content. I want to do things a different way.” The more established, and the more success you have; the more you can do what you want to do. I can pick and choose what I wanna do, and I won’t do certain types of content anymore.I love storytelling. I think storytelling can be done in every format, and I’m not in a box. I don’t want to be bound.

You have advanced degrees as well as a Law degree. How did you make the transition to working as a producer? Additionally, what have been the benefits of producing, writing and creating your own content?

I think that’s the real power, and I encourage actors to also become content creators. If you don’t like what you see on TV, then you have to make the content. You have to make it. That’s the power of it. If you want to change the world, you have to be a part of the change. A lot of us don’t realize that the real power is behind who’s controlling the content. I think we need more people looking at creating more, instead of just being in front of the camera.

In The Context Of Creating Opportunity And Taking Ownership Of Narratives, Can You Share More About Your Nonprofit Dreamers With Purpose?

It’s really a hybrid off of my school. I have an educational platform called “Backstage Pass To The Movie Industry.” It’s designed for everyone and designed to teach the business aspects of acting, writing and directing, as well as producing. The reason why we teach the business of acting is because a lot of people jump into the business eagerly, yet they have no idea what they’re doing. This is how you lose money. We teach things like the importance of having an accountant or a lawyer, so that they can understand what they’re signing on a contract. The reason why I started Dreamers With Purpose is for the people who can’t afford to go to my school. I want them to still have the same opportunity and we’re all dreamers, right? But we have to have purpose in our dreams. We have to have a focus. We have to have guidance. We have to know where we’re going. I started the program with the mission to guide people from the place of just dreaming it to it actually becoming a reality.

This question is for all the moms out there. Why should moms run their home as if it were a business?

While I do not have kids, I have nurtured many dreams. Moms are the number one business, because the first person that teaches anything is a mother. They’re our first teacher. A mother is the first teacher to a child, not the teacher or educator. They teach you how to eat. They teach you etiquette. I learned how to comb my hair from my mother. They teach you about finances. Mothers are just underrated. Being a mom is big business. Now, everybody’s seeing how hard it is with their kids, being home with the distance learning and homeschooling. I hear everyone. I lift my hat up to all mothers. They are the ultimate teachers, and being a mom is serious business.

Learn More About Angela White On Her Website HERE.

Silver Lining Entertainment is an independent production company based in Los Angeles, California. Established in 1997 in New Jersey by founder Angela White, the company’s new mission is to develop independent television and film projects from inception to completion, for worldwide distribution through the utilization of secured capital. SLE’s current focus is on forging strategic relationships with other companies, talent and producers to create, develop, produce and distribute their projects to targeted audiences throughout the global marketplace. For more information on Silver Lining Entertainment, visit www.asilverliningentertainment.com