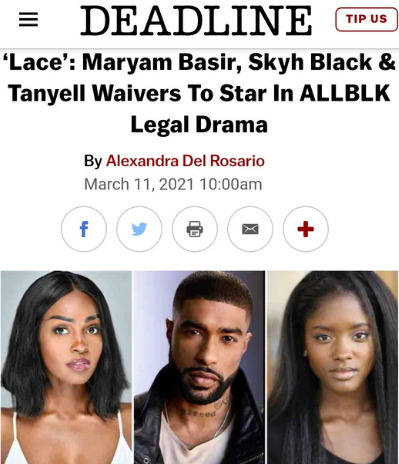 Lace, directed by Deuces and Brotherly Love helmer Jamal Hill, follows a prolific Los Angeles attorney who often blurs the lines between right and wrong to protect her rich and powerful clientele. The series will premiere in the fall and also features Taylor Bynoe, Mollie Dolcimascolo and Isaac Stephen Montgomery in supporting series regular roles.

Basir’s Lacey McCullough is a successful and highly connected attorney whose influence sometimes leads her down a very dark path. With the help of her trusted associates, Othello Charles (Black) and Britney Deveaux (Waivers) – and the ever-efficient twins, Aaron (Harris) and Nora Tuft (Bynoe) – she’s currently involved in one of her most mysterious and perilous cases to date.

“As we empower our cast to bring Lace to life, and as we develop content in midst of the industry’s latest evolution, we are proud to say that this series – led by two Black women – is now employing many multicultural professionals across cast and crew with a production set that looks much like the world around us,” said Nelson.

Nelson and Hardy will serve as co-showrunners and will executive produce alongside Starks and Grant. Silver Lining Entertainment’s Angela White will also produce the first season.