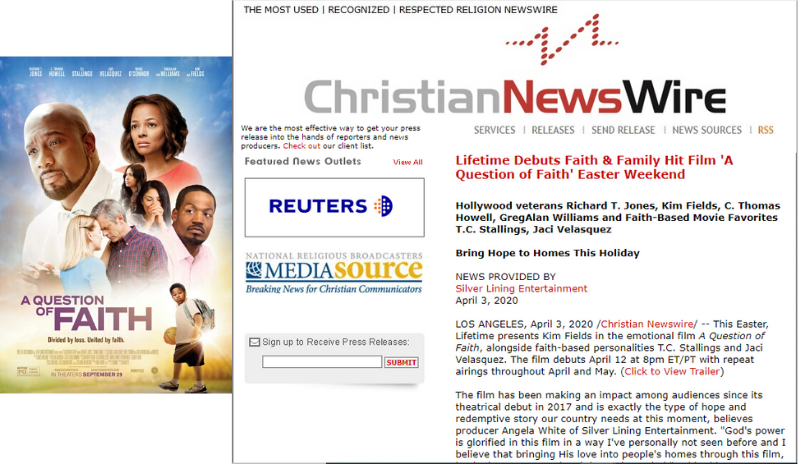 Bring Hope to Homes This Holiday

LOS ANGELES, April 3, 2020 /Christian Newswire/ — This Easter, Lifetime presents Kim Fields in the emotional film A Question of Faith, alongside faith-based personalities T.C. Stallings and Jaci Velasquez. The film debuts April 12 at 8pm ET/PT with repeat airings throughout April and May. (Click to View Trailer)

The film has been making an impact among audiences since its theatrical debut in 2017 and is exactly the type of hope and redemptive story our country needs at this moment, believes producer Angela White of Silver Lining Entertainment. “God’s power is glorified in this film in a way I’ve personally not seen before and I believe that bringing His love into people’s homes through this film, beginning Easter weekend, is much needed,” said White.

When a teenage girl hits a twelve-year-old boy with her car while texting, the tragedy inevitably links three families together. In the wake of the tragedy, their destiny forces them on a converging path to discover God’s love, grace, and mercy as the challenges of their fate could also resurrect their beliefs. Kim Fields, Richard T. Jones and C. Thomas Howell star in the film written by Ty Manns and directed by Kevan Otto.

The movie is the first of its kind in the space to have been produced by an African American female producer—and the second faith-based feature for veteran producer Angela White.

Many faith leaders have loved this film and the outreach opportunities it presents. Bishop Neil Ellis praised the film for being a “moving experience of the demonstration of the power of faith, forgiveness, and focus for the future.” Pastor Ben Graham called the film “the must see faith movie of the year.”

Respected leader Nathan Kistler of Hope To The Hill in Washington, who arranged a congressional screening for the film, declared that “every politician, faith leader and American must see this powerful view into the grace and forgiveness that Jesus brings when we humble ourselves. A must see for all!”