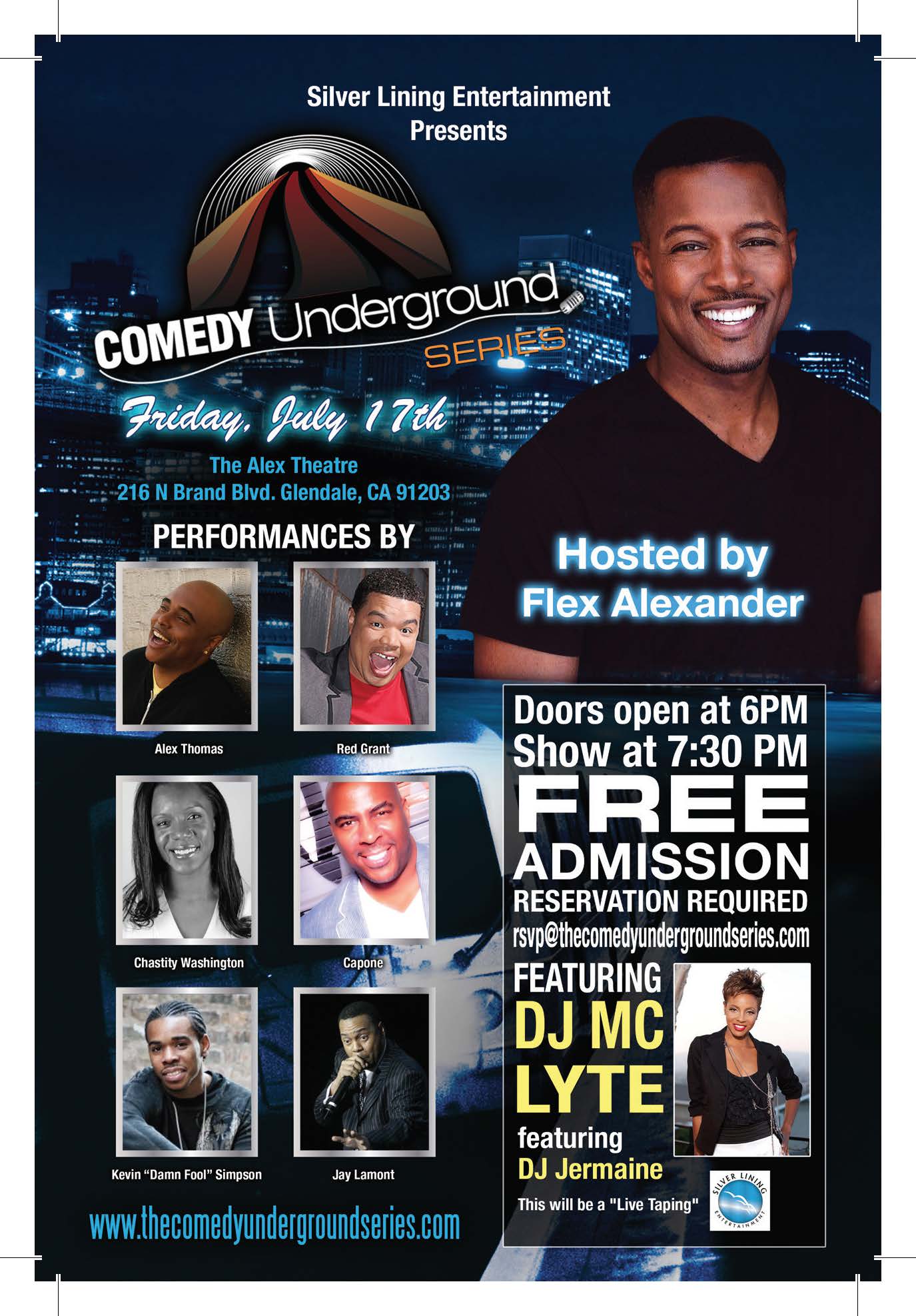 Flex Alexander is a comedian and an actor whom you may remember from the television series One on One. He also stars on OWN network’s docu-series Flex & Shanice with his wife, Shanice Wilson. When SoulTrain.com caught up with comedian, he was just about to host Comedy Underground Series, Silver Lining Entertainment’s new production.

The first Comedy Underground Series, hosted by Tony Rock, premieres on July 24, 2015, and Silver Lining Entertainment is in the thick of production on their second installment. “Comedy is universal medicine, as the power of laughter to touch transcends across the world. The Comedy Underground Series looks to break fresh new faces and re-introduce season veterans, who are currently absent from mainstream television and media.  The series is shot with segments featuring a docu-style format, so we can delve into a comic’s journey on the road to stardom.  I look to have this series become a funny and thought provoking stand-up comedy show with a twist of “real life” as a comedian’s path is not always easy but they do their best every night to bring laughter where there is a need.  I salute comedians as they are examples that there is always a ‘Silver Lining,’” says Comedy Underground creator Angela White.

Each volume in the series features a celebrity host and three stand-up comedians.  Audiences may recognize their faces, but can’t necessarily place the name.  Comedy Underground comedians not only perform on stage and make themselves known, but also give the audience a behind the curtain glimpse at their climb to success.  Each comedian discusses life on the road and their triumphs and tribulations throughout the comedy industry on that quest for nationwide exposure.

SoulTrain.com:  How did you get the name “Flex?”

Flex: That came from hip-hop dancing.  I was real flexible and all that.  My boy Stretch, another dancer, a legend in the game, gave me that name.

SoulTrain.com:  Before getting into comedy, you danced with Salt-N-Pepa. You were also a choreographer for Mary J. Blige and Queen Latifah.  How did you make the transition from dancer to comedian and actor?

Flex:  It was a natural progression.  Dancing put me around the right people and I learned a lot.  Going to stand-up was an easy transition because I was always kind of goofy.  Transitioning to acting came through stand-up.  They were casting for a movie called Juice.  They came to the Uptown Comedy Club and saw me.  I auditioned for the role that Omar Epps ends up playing.  Then it came down to the wire.  They liked me so much that they gave me a little part with Queen Latifah.  It was fun.  The transition was pretty smooth; one flowed right into the other.

SoulTrain.com:  Both you and you singer wife, Shanice, are reviving your successful careers after a devastating fall from the public eye.  What, if anything, are you two doing differently this time to ensure your success this time around?

Flex:  Being smart and living below our means.  Not trying to be the most.  Not like we did.  Not incurring high monthly debt, just dealing with the essentials—what we need, as opposed to what we like.  You know, just trying to be smart.  We’re not all the way where we want to be, but we’re not where we used to be either.  We’re just learning and being more “hands on” with all of our stuff now.

SoulTrain.com:  As the host of The Comedy Underground Series, I know that you are going to bring it.   How do you prepare for your gigs?

Flex:  There’s no preparation other than I go see my stages beforehand.  I performed last night at the Comedy Union.  Tonight I will be at Flappers.  I just want to have fun.  I’m so excited about it.  I’m bubblin’. I’m nervous.  Just all of that stuff.  I’m just gonna bring it.  I want people to have fun and have a great time.  I want people to walk away and say “Yo!”  Not only for me, for all of the comics.  I’m hosting it, but I’m not trying to make it just me.

SoulTrain.com:  Besides hosting The Comedy Underground Series on the Urban Movie Channel, and having the reality show Flex & Shanice, what other projects should we be on the lookout for?

Flex:  I have some other creative things.  I am actually sitting down with a few producers and studios about a sitcom that I have.  That is definitely what I want to get back to, sitcoms and the drama.  I’m working on my own special, our special.  I’m looking to shoot that next year.