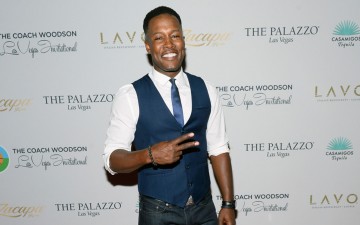 The world needs comedy. Flex Alexander specifically needs to laugh. It’s been years since he’s been on a stage since battling the inconsistencies of Hollywood and bouncing back from bankruptcy—see his number one show on OWN, Flex & Shanice. But now he’s back on stage hosting the third and fourth volume of the Urban Movie Channel’s The Comedy Underground Series.

All Flex can do is smile with thanks. “Because people have seen my story unfold on the show. Me getting back into standup,” he says of Flex & Shanice. “People seeing me doing this, and then I get the call. Which is why it’s so important to watch what you think and speak. Because you can speak life and death, and I choose to speak life into everything I do. And I’m thankful for the opportunity. Just thankful.”

Fans of his reality show know where this humbleness comes. His success on TV in the 1990s and through the early part of the millennium with comfortable run starring on One on One (which he wrote and produced) ended after five years. The subsequent fall of the UPN network led to a stall in Hollywood work among many Black TV actors, including Flex. Income gained from small roles in films and on TV weren’t enough to match a lifestyle that led to a financial overhaul, forcing Flex and his wife, R&B star Shanice, to sell nearly everything.

Now 45, with a high school daughter and 11-year-old son, Flex has nothing but wisdom for who he was in his younger days. “I’d have told him to find a mentor financially back then. And really invest well. And don’t spend frivolously,” he says with a laugh. “I’d have told [young] Flex back then to savor the moment a little more. And I appreciated it. But you think it’s going to be there all the time, and you find yourself flying through life.”

Being financially savvy or reckless is a learned trait that makes the difference between one who grows money or spends it as fast as water flows. “All I saw was my mother and father working check to check. That’s all I saw. I’m not blaming them for that. They did what they was taught. So I didn’t have that training,” he says.