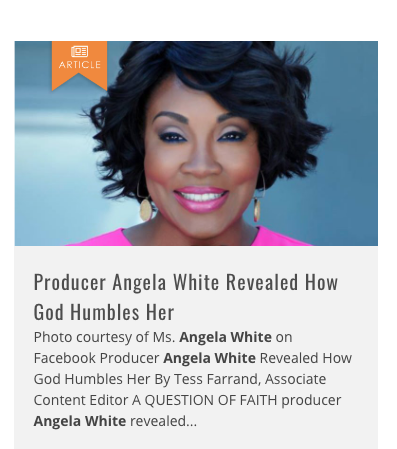 A QUESTION OF FAITH producer Angela White revealed that God humbles her through filmmaking because the projects she works on aren’t about her.

“You can’t do anything without a team…it’s impossible,” said White. “I’ve learned, even through this process that when I think it’s about me, God humbles me very quickly.”

White’s faith-based movie A QUESTION OF FAITH premieres on Lifetime this Easter Sunday, a time when audiences didn’t expect to be in their homes.

However, White said that it’s a sort of blessing in disguise.

“I think it’s awesome that during this Holy Week, the film [will premiere],” White said. “And actually, on Easter, we probably will have our biggest audience ever… who would have thought?”

A QUESTION OF FAITH stars T.C. Stallings of COURAGEOUS along with other names like Kim Fields (LIVING SINGLE) and Richard T. Jones (VANTAGE POINT).

The movie also has a very powerful biblical/Christian worldview that stresses the need to make healthy choices.

Watch our video review below.

White took her interview with Movieguide® in her pajamas and she’s confident that God has a “master plan” for this season of isolation due to COVID-19.

“We’re not above anybody,” White said referencing the power of humility. “Even during this pandemic right now. We’re realizing there’s nobody special, [the virus] attacked everybody. It doesn’t matter who you are.”

White continued, “I would say in these times that even though we can’t see it, God has a master plan, that everything works towards your good even if you can’t see it.”

White leans on Philippians 4:13 as an anchor during her busy schedule. The verse reads, “I can do all this through him who gives me strength (NIV).”

White told Movieguide® that stories that tug on her heartstrings are based off real-life struggles and that’s what keeps her going in an industry that works paycheck to paycheck.

White looks forward to the premiere of  her new series PUMP and starting her new faith-based movie that centers on Autism.

Please keep White and other Christian filmmakers in your prayers during this time as they aspire to bring worthwhile content to audiences around the world.