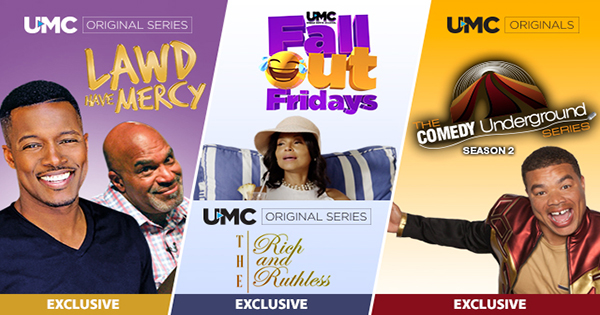 The first variety series coming to UMC, Lawd Have Mercy, is a Sunday church service version of America’s Funniest Home Videos hosted by Flex Alexander (Single Ladies, Girlfriends) and comedian/writer Buddy Lewis (Real Husbands of Hollywood). Greenlit for a second season, The Comedy Underground Series initially premiered on UMC in 2015. The returning series, which kicks off with new host Red Grant, spotlights some of the world’s funniest comedic talent and rising stars. Lawd Have Mercy will premiere on Friday, August 4, 2017, followed by the return of The Comedy Underground Series on Friday, August 11, 2017. New episodes for both series will be added weekly through Labor Day weekend.

Hosted by Flex Alexander along with co-host Buddy Lewis, Lawd Have Mercy is a video clip show that takes a lighthearted look at faith and religion. Produced by former Major League Baseball player Kenny Lofton and his producing partner Brenton Earley under their production company FilmPool, the new variety series showcases some of the most righteously funny videos on the internet today with the help of the Lawd Have Mercy gospel choir. “UMC is the perfect home for Lawd Have Mercy,” says Brenton Earley. “When the creator Lee House brought us the idea, we knew we had a home run. With Flex already attached, we knew adding Buddy and the LHM Choir would make it a Grand Slam,” says Kenny Lofton. Craig Hall, Theida Salazar and Chadwick Williams also served as producers on the project.