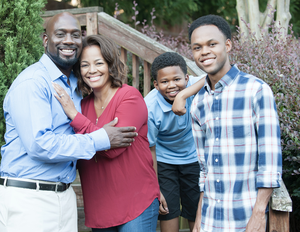 If you know our team at all, you know that we can be a bit skeptical when it comes to faith films. But it seems that the bar has been raised in a big way this year (check the upcoming reviews for “Mully”, “The Stray”, “Champion”…), and we’re surprised, encouraged and hopeful that this is a new normal.

This weekend, the new movie “A Question of Faith” will hit theaters, which is being touted as the next “War Room”.

I’ll be honest. I never saw “War Room.” But I might now, as “A Question of Faith” is inspiring, well acted and gives a great message of faith, grief and forgiveness.

To summarize – the film follows 3 families whose lives come together after a tragedy. First – Pastor David Newman and his family. David is a loving father with a great heart…but he happens to be neglecting his family for the sake of his ministry. Second – John Danielson and his family. John’s construction business is in trouble, right as his daughter, a talented vocalist on the cusp of a successful career, collapses on stage. Third – the Hernandez family, whose teenage daughter has a habit of texting and driving.

These three families intersect after a tragic accident where Maria Hernandez accidentally hits and kills Eric Newman while reading a text on her phone. Eric was walking to a basketball game alone because Pastor David is late picking him up.

The rest of the movie is a story of grief, faith, family, reconciliation, and forgiveness, as well as a loud message endorsing organ donation and giving the harsh consequences of texting and driving.

Overall, the acting is solid (strong props to Kim Fields who plays Theresa Newman). While the script isn’t perfect, the message comes through loud and clear. Unabashedly Christian in message, the strong themes should resonate with anyone who has suffered loss or is currently facing a crisis that seems more than one can handle.

I also hope that the message of organ donation is received and a wealth of believers will overrun the Donate Life website and commit to becoming a donor. Honestly, it’s just a very Christian thing to do.

Here’s the trailer for A Question of Faith: